BeFlexi is pleased to announce its sponsorship of Anagennisi Germasogeias Football Club for a second year running.

“We are proud to continue our cooperation with Anagennisi. The Club plays an important role, providing athletic and cultural opportunities for young people, as well as promoting fair play. Wherever we can, we want to support the local community and will continue to do so” says Bruno Silva, Managing Director.

The manager and coach of Anagennisi Germasogeias, Kyriakos Kakoulli said “We would like to thank BeFlexi for their financial support over the past few years, which has meant a lot to the team and has kept us going. We wish every success to BeFlexi and its owner.”

Anagennisi Germasogeias is a Limassol football club based in the Germasogeia district and was established in 1956. The sports club also comprises of men’s and women’s basketball subdivisions. Anagennisi has in the past competed in the Second, Third and Fourth division of the Cyprus football league. Today Anagennisi is participating in the PAAOK Championship in Group A.

The BeFlexi team has throughout the year watched many of Anagennisi’s games, showing their support on the field.

Last season, the Anagennisi team ended in the 5th position of their group. This season are currently in 4th place, but are setting their goals even higher. 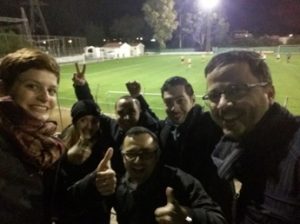 We are proud that the team’s kit will continue be bearing our logo and we are looking forward to watching the season unfold!